As part of the integrated Mother and Child program and keeping in view health and hygiene for mothers and children, a project to build indoor toilets for qualified village women at their homes has been undertaken.  The purpose of this is to give the women privacy and safety, as well as more comfort and convenience, especially during the post natal period.

Once the sanitation give-away program was announced in 2013, an overwhelming number of applications came in; over 5,000 in the first year. Recipients were chosen, without any discrimination with regards to caste, creed or religion, according to the Trust’s need based policies. Contractors were appointed to build the restrooms in batches. Once a batch of restrooms was completed, the keys to their individual restrooms were distributed to the villagers at a small function in the SSSEWWT offices. This project is progressing very well and will continue to expand until all the villages in the surrounding areas are served.

These toilets are installed outside the home, in a separate room built for the purpose. These rooms are built of stone and cement brick, with an Indian style basin. All of the materials and the construction are given to the beneficiaries free of charge. After the construction is complete, the ladies come in to the Sri Sathya Sai Easwaramma Women’s Welfare Trust offices to receive their keys. Most of the keys have been given into the hand of the ladies’ infants.

In 2017, the Distribution of Keys for the completed Sanitation Units took place as follows:

To date, a total of 3,400 sanitation units have been completed for the mandals of Puttaparthy (1,845), Kothacheruvu (772), Bukkapatnam (510) and Nallamada – (273) respectively. Applications for new Sanitation Units are open to all qualifying ladies (not only medical camp participants) in the four mandals covered.

In June 2013, a new project to encourage the spirit of education was initiated for school children. Notebooks were distributed to children in the surrounding schools. The number of notebooks distributed each year has successively increased. Starting with 3,113 notebooks in 2013, the figure increased to nearly 5000 notebooks in 2015 and 10,000 notebooks each in 2016 and 2017 respectively. 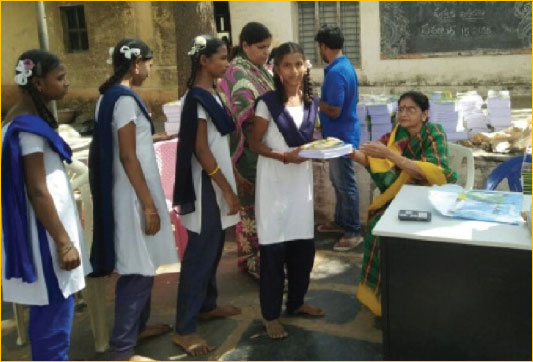 Now other needs of the students, such as books, atlases, globes, compasses, school bags, solar lamps and science lab kits are being considered for distribution. This is an on-going project for the SSSEWWT and, now, schools in other districts, as well, are being surveyed for their needs.

In keeping with its commitment to women’s welfare, and to encourage more and more girls to pursue higher education, the Sri Sathya Sai Easwaramma Women’s Welfare Trust provides University Scholarships to girls. Direct fee reimbursements are made available for qualifying girls from poor economic backgrounds. These are open to all, regardless of caste, creed or community, for any study they wish to pursue, including diploma courses, technical training, bachelor’s and master’s degrees, in fields such as engineering, arts, commerce, food science, and nursing. In July 2017, a total of 30 scholarships were awarded by the Trust.