In The Kitchen with SSSEWWT

This time we are delighted to bring you delicious Vegetarian Recipes from two cook books that were presented to us last November. The first is a book called ‘Sailicious’ produced and published by the Sai Study Group Jakarta and the second is ‘Sai Delights’ (parts 1 and 2), published by the Sathya Sai International Organisation of South Africa. Both these books go to show how ‘Vegetarianism’ – as recommended by Swami - is catching up all over the world! However, before we go to the recipes, we would like to draw the readers’ attention to the benefits of the ancient practice of offering prayers before eating food.

An excerpt below (from http://www.sathyasai.org/about-us/health-corner/food-prayer), explains the importance of offering prayers before eating your food. Hence the custom of saying ‘Grace’, as in the West and chanting a Sanskrit prayer, as taught by Swami.

“In the early days (70s if I recall), Swami had asked all the Brindavan campus college boys to join Him for lunch. At that time, only about 100 boys were there. Kirlian photographer Dr. Baranowski was also there and was invited for lunch. The sumptuous food was laid out on plates in front of the boys. The boys were waiting for Swami to come and join them. Dr. Baranowski then used his Kirlian camera (this also photographs the aura of anything that is photographed) and took photos of the food laid out on the plates. No aura was found around the plates of food.

The mantra and its meaning are given below.

We thus urge all our readers to chant their prayers before taking their food. Beloow are recipes for a colourful and delicious Quinoa salad, followed by a main course of a Soya Cottage Pie and a Dessert. Do try them and let us know if you liked them.

Mix together the honey, olive oil, lemon juice, pepper and salt and set aside.
Mix Quinoa with all the other ingredients.
When ready to serve, drizzle enough dressing and mix it into the Quinoa.
Do not add too much dressing , as it will make the salad soggy. Serve immediately.

Recipe from ‘Sailicious,’ Produced and Published by the Sai Study Group Jakarta 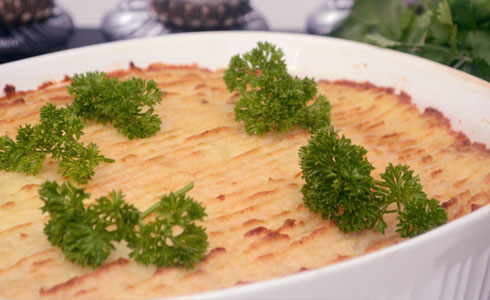 Boil the soya mince with cinnamon sticks. Strain and set aside. Heat the oil in a pot and braise the mince with the leeks, ginger, hing, spices and salt to taste. Set aside when done. Boil potatoes and make a mash. Add salt, butter and a little milk and mix well to a smooth consistency. Preheat the oven to 180*C. In a square casserole, set the mince and press it down with a fork. Add the mashed potatoes on top. Brush it with milk and bake till light brown. Serve hot with steamed vegetables.

Recipe from ‘Sai Delights – Part I,’ Published by the Sathya Sai Organisation of South Africa 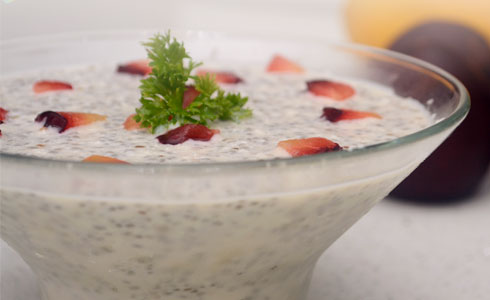 Combine coconut, Chia seeds, Coconut milk, Coconut water, vanilla essence, salt and Maple syrup in a container. Mix all the ingredients well. Refrigerate for 30 minutes – this allows the seeds to thicken. Top with fruit of your choice and serve.